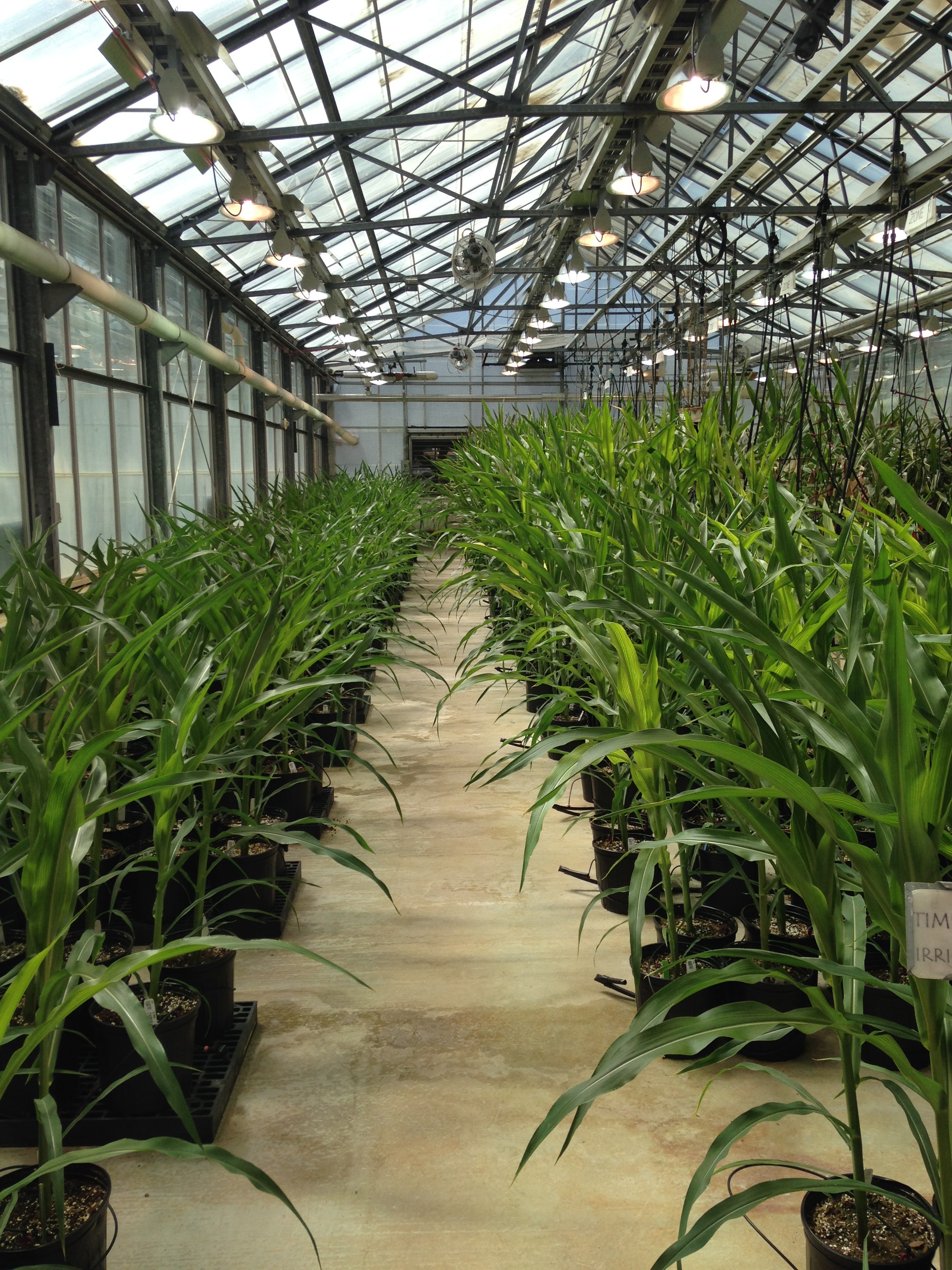 An Inside Look into Monsanto and the GMO Controversy 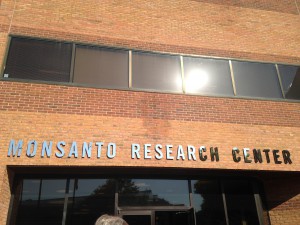 Have you ever wanted to get an inside look into Monsanto and learn more about GMO’s and what all the controversy is about? Now, here is your chance.

I recently had the chance to go on another Farm Food Tour sponsored by Kansas Farm Bureau, Kansas Soybeans, and Kansas Pork Association. The first one I attended visited a variety of farms across Kansas which you can read about here.

This tour took us a little deeper into the science of our food where we got to tour the Monsanto headquarters in St. Louis, Missouri. What an eye opening experience it was for me! 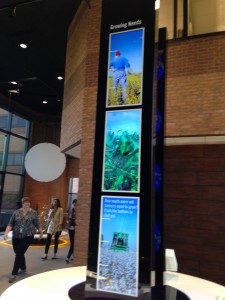 I have to admit, I have been a one sided girl on the issue of GMO’s and have been totally against them. I have enjoyed the opportunity to work with Kansas Farm Bureau and attend these tours to get more educated on the issue.

Since the 90’s Monsanto has primarily been a seed company spending most of their research on plant breeding which has been going on for centuries. That is how we have so many varieties of fruits and vegetables. Check out all the vegetables we have now that stemmed from breeding the yellow mustard plant. It’s given us crops like cabbage, brussels sprouts, kohlrabi, kale, broccili and cauliflower. 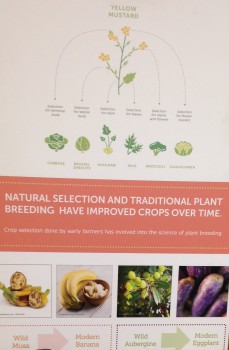 Monsanto does however still produce Round-Up and has two primary sections of the company, seeds and crop protection. Both focus on agriculture just in different areas.

We did not get into too much discussion on the crop protection production side of things at this visit so I cannot comment very much on that issue.

We did however talk a lot about GMO’s. What makes GMO’s a little different then plant breeding is there is more science and biotechnology that goes into making the seed. They look at issues that farmers are facing and try to help develop seeds that help with weed, pest control and other issues.

So here are few questions I had and answers I got.

How did Monsanto make a Round-Up Ready seed?
By doing research they found a bacteria resistant to the herbicide Round-Up and incorporated that bacteria into the DNA of the soybean seed so now when the crop is sprayed with Round-Up the weeds will die but the soybean crop will not.

Will using too much Round-Up eventually give us super weeds?
Crop rotation and other farming practices are being used to help avoid this.

What about the virus resistant papaya? How does that work? Do you give the papaya a vaccine like a human would get a flu shot to protect it from the virus?  Check out the short video at the bottom of the page that explains how a papaya resistant to the Papaya Ring Spot Virus was created for the answer to this.

The tour at Monsanto was very interesting and the scientific research they are doing is mind blowing and the more I have learned the less scared I am of them. But my mind is spinning over the controversy of the other side too and I still need to learn more. 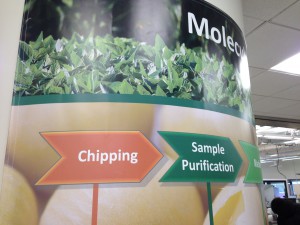 I do however appreciate their approach on trying to help people in poorer countries feed their families. 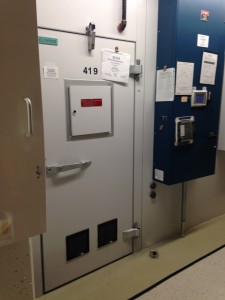 Entrance to Growing Room at Monsanto

The Monsanto research facility houses growing rooms where they can replicate the climates of other countries and develop seeds to grow under those conditions. In return this helps farmers and families in underdeveloped areas grow more food to help them and their livestock thrive. 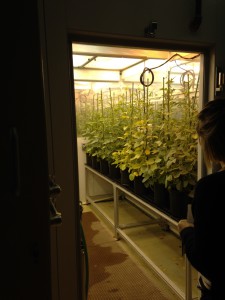 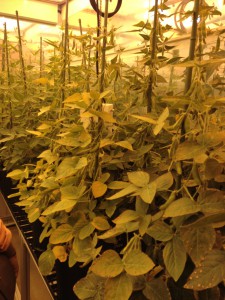 Although, some believe you cannot alter a plant to adapt to climate. Who is right?

The research on developing pest resistant plants is pretty incredible as you can see by the pic below the difference between the plants attacked by the velvetbean caterpillar. 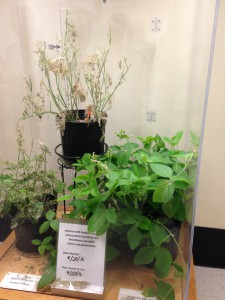 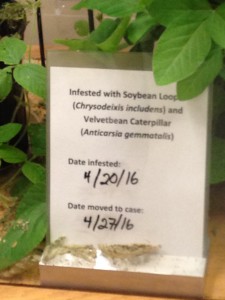 Is it safe to put an insect killer in plants?
After many years of research it is deemed safe but the controversy lies that the long term effects are really not known yet and some say it is killing off good insects like butterflies.

For those living in areas where this plant is one of your main food sources to survive, then long term effects and butterflies are probably not as important as is facing starvation.

Their research on microbes (those tiny organisms like fungi and good bacteria) are helping develop better soil for the plant. Think of them as probiotics for the soil that aid the plants root system, nutrient content, growth and protection against disease. 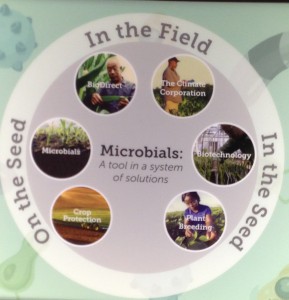 Is this because some people believe Round- Up is destroying the soil and they need to find a way to help?
GMO supporters would say no, those against would say yes. 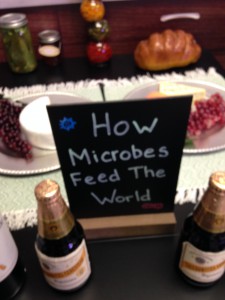 I think a lot of the controversy about Monsanto stems from Monsanto making chemicals as they used to be an industrial chemical company making things like Astroturf, saccharin and other things. Some of which were made under government contracts that has caused quite a bit of controversy.

I get that some awful things happened and am not sticking up for them in anyway, but a lot of things like that have happened. There was a time when we did not know that cigarets could cause lung cancer and kill you. It can take years to know the effects of some certain things. There are plenty of household chemicals we buy everyday that can harm us as well.

In the last few decades Monsanto has become focused on agriculture and the controversy and questions are endless. I can see there are extremes on both sides, just hang out on youtube for a while.

Do the anti Monsanto videos of skulls and cross bones and people wearing gas masks freak me out?
Sure, they are really creepy and certainly raise some questions.

Do the pro GMO videos make sense as to why they are doing it?
Yes, It seems like a good thing to help starving people.

What about the farmer and having to sign a contract?
We got to speak to a panel of farmers and this just means that the farmer cannot save the seed. Some can look at it that it as just a way for Monsanto to make more money as the farmer has to buy new seed every year. The farmers response was that they really do not want to save the seed as it might not produce a great crop anyway. 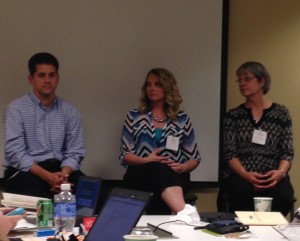 These farmers have families just like us and in the end want to produce the healthiest safest foods they can for themselves and us in the most effective way they know how.

What about the bees and butterflies? Lots of controversy on this!

Vitamin A Enriched Rice? One side is for it, one is against.

There are hundreds of topics that involve GMO’s each with its own debate that are far to lengthy to cover in one blog post. In the end it all has to come down to a personal choice and educating yourself. The transparency and openness that was shared with us about what they were doing was invaluable information.

My personal choice is to still eat organic and non GMO foods when I have a choice. Although, the more I learn the less scared of them I am. This does not mean I have partaken in the Monsanto Koolaid and am okay with everything they are doing it is just the lifestyle that I live and what works for my family and I until I learn more. I’m also not a fanatic about it when dining out or traveling or even having an occasional indulgence. I believe life is all about balance.

If organic foods are not in your budget, you can still eat healthy. Soy and corn are the most widely used and most of those go into animal feed and some processed food. So if you eat a healthy diet with lots of fresh fruits and vegetables you are not going to get that many in your diet anyway whether you are opposed to them or not. I’ve listed the GMO crops at the bottom of this post. I have done my best to get the most current but the list is continually growing so always double check as everything may not be listed. The information below is from the site Best Food Facts and is a great site to visit that covers about every topic that involves food.  I’ve also included some links to some short videos that help explain things where you don’t need to be a scientist to figure it out.

Almost everything in this world is two sided and the GMO’s debate is no different. I see valid points on each side. I wish I could give you more of a clear cut answer on who is right and who is wrong but I really can’t. I still need to learn more. I do hope I have at least given you some facts to research to help you make a decision that is right for you.

Please feel free to comment or ask any questions that you have concerning Monsanto, GMO’s or farming practices. I’m really interested in what you have to say. If I don’t have an answer I will try to find it out for you!

I also wish to thank Kansas Farm Bureau, Kansas Soybeans and Kansas Pork Association for inviting me on this tour and providing travel, meals and accommodations. I also want to make clear that in no way was I compensated or influenced by Monsanto. All opinions in this article are my own.

How are GMO’s Made (story of the papaya)

Soybeans
The GM soybean plant is resistant to pests and disease as well as being tolerant of herbicides that are most effective, allowing for less herbicide use overall.

Canola
Canola has been modified through biotechnology to make it tolerant to some herbicides. This allows for a reduced amount of chemicals needed for weed control. The modified plant also has resistance to pests and fungus.

Alfalfa
The GM version of alfalfa is tolerant of some herbicides, allowing for a reduced amount of chemicals needed for weed control.

Sugar Beets
The GM sugar beet has increased tolerance to some herbicides, allowing for a reduced amount of chemicals needed for weed control. GM sugar beets also have virus and pest resistance traits.

Papaya
The GM version of papaya makes the plant resistant to the prevalent Papaya Ringspot Virus.

Squash
GM squash has traits that improve the plant’s defense against viruses.

There are other GM crops that are currently being tested, but are not yet available to consumers. For instance, the Innate potato, which the USDA recently approved for commercial planting, is a non-browning variety of potato. And the Arctic apple has GM traits that resist browning after being cut.