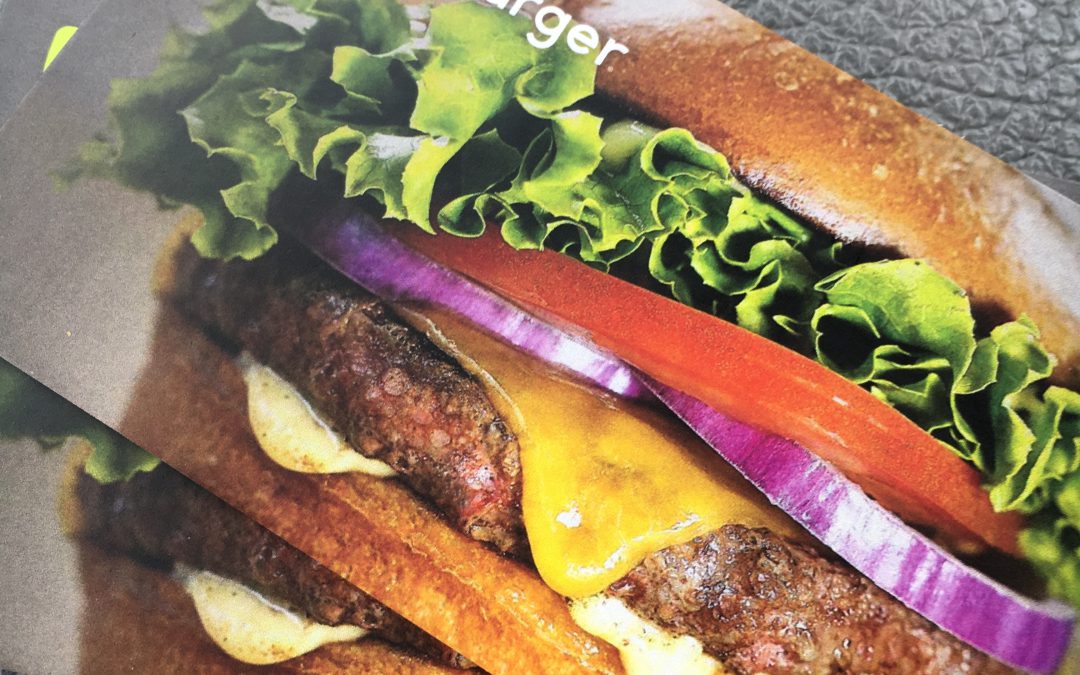 When Chef Thomas Salamunovch of the fine-dining restaurant Larkspur in Vail, Colorado had a desire to bring fine dining to the masses, the fast-casual concept of Larkburger was born.

Larkburger is a Colorado based fast-casual gourmet burger chain that is quickly expanding beyond it’s borders. Overland Park, Kansas is the first city outside of Colorado to score this restaurant which opened in early 2017.  Another location is in the works for the Missouri side just off of the County Club Plaza in Kansas City.

I recently had the chance to try it out thanks to a couple of “free burger” cards they sent me. 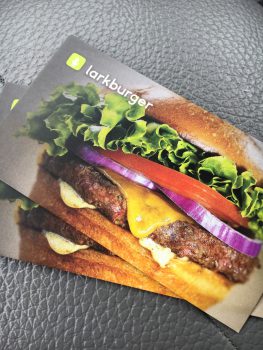 Guess what? They want to give you some too along with some other Larkburger swag. Two winners are eligible for that and details are below, but first here are the details on the menu and some really cool things you should know about Larkbrger.

The menu is diverse and a perfect place to take the whole family. From burgers to kale and a few things in between everyone can get something they like. I think one of my favorite options is the steamed edamame. 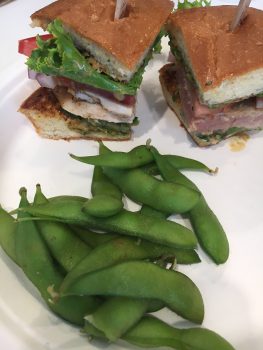 Although, I am a sucker for fries, which are hand-cut in-house and are amazing, it is nice to have an unfired option when I am trying to cut back on calories.

The day I visited I had to grab a to go order for my son and I. The sweet girl taking my order was so patient with me as I could not decide what salad to get. I finally decided on the kale salad. 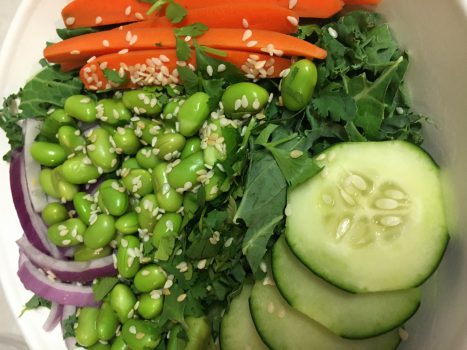 I knew my son would go for a burger but being the picky eater he is I knew I had to order it plain. I got him the traditional Larkburger with meat, cheese and bun which means he missed out on the special sauce which is made from scratch and what I think is the best part! All burgers are cooked to order at your desired temperature and of course served however you want it. All of Larkburgers sauces and dressings that accompany their array of burgers, sandwiches and salads are made in-house using only the freshest ingredients.

Although, I scored a bite of the burger which was tasty even without the sauce, I really enjoyed the kale salad and appreciate the diversity of the menu items Larkburger offers. It makes it super easy for carnivores and vegetarians alike to both order something that will satisfy their appetite. As I mentioned before it is great place to take the whole family. Not only do kids under 12 eat free on Monday’s with an adult purchase, it allows mom who may be watching what she eats get something satisfying when the rest of the family is craving burgers and fries.

I do need to mention that although a burger is going to have more calories then kale, you don’t need to feel as guilty if you indulge in one at Larkburger. The burgers are fresh and made from local Black Angus beef. That in itself is already going to be lower in calories than the average processed fast food burger that is shipped frozen from who know where.

Everything is fresh at Larkburger including the tomatoes which ripen in an in-house cabinet until they are at peak flavor and the house-cut fries are cooked in a trans free canola oil. 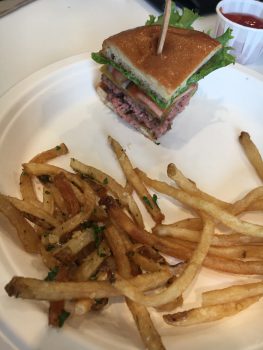 The Larkburger with Hand-Cut Fries 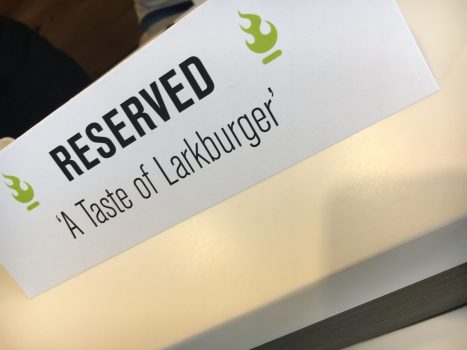 I recently attend a blogger event they had and got a little swag myself along with some tasty samples. 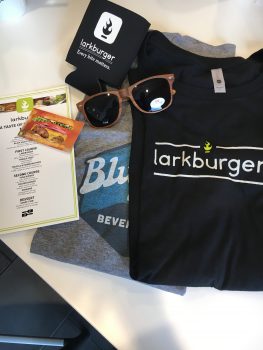 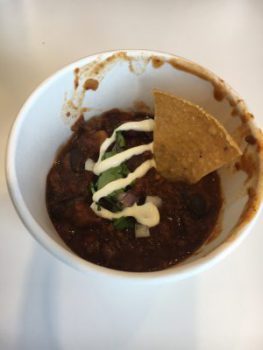 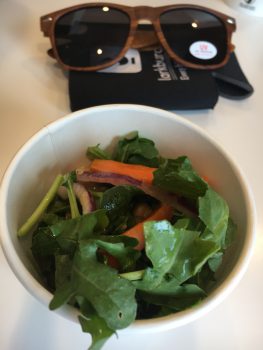 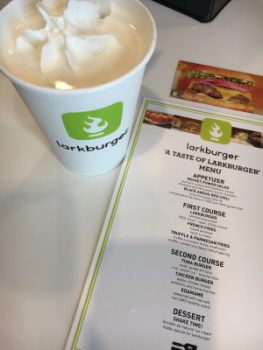 Apart from having great food, Larkburger is also kind to the environment and takes sustainability seriously.  Outside of the condiment packets and juice and milk cartons, everything is compostable. Every napkin, utensil, wrap, cup, bag, box and straw! The size of the restaurant trash can is no larger than a 9×13 baking dish. The space and decor is sleek and clean with the chairs made from recycled materials and the walls are reclaimed cypress wood. In addition, their fry oil is recycled and converted into alternative fuel and 100% of the electricity usage is offset by purchased wind credits. 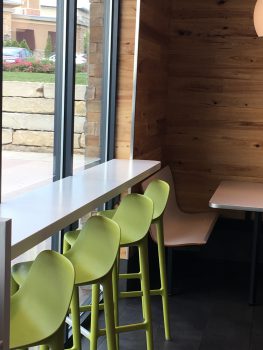 Larkburger also is committed to supporting local and will source beer and soda from the region the restaurant is in to serve at that location. For a list of all Larkburger location visit their website.

Now in order to get free burgers and swag from Larkburger all you have to do is comment below on how you top your burger!

Two winners will be drawn using random. org from the number of entries. Example first commenter is number on and so on. Contest ends midnight Monday, June 12.  Winners will be notified via email so be sure to leave a valid email with your comment. Good Luck! 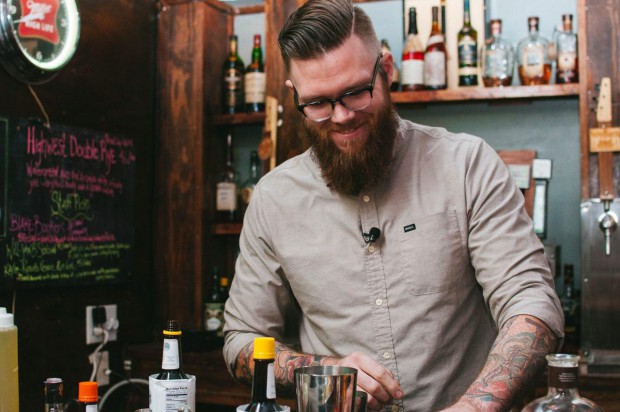 Andrew Olsen from Cleaver & Cork was recently named the Kansas City finalist in the Four Roses Charity Cocktail Challenge, which raised funds for Stupid Cancer. Andrew will compete with bartenders from 7 other cities for a chance to spend a day with their Master Distiller Jim Rutledge. 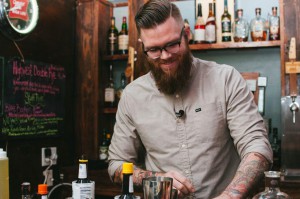 Andrew Olsen of Cleaver and Cork

I was at Cleaver & Cork a few months ago and the both the food and cocktails are amazing. If you have not been, it is worth going. The menu developed by Chef Alex Pope uses a mix of local and seasonal ingredients. The cheese curds are amazing and the sweet potato soup is the best I have ever had. 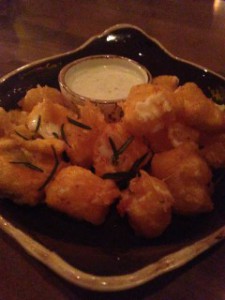 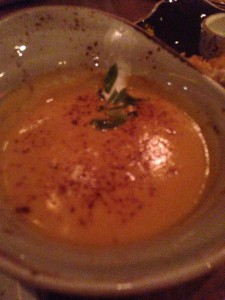 I have been invited in to try Andrew’s new cocktail but due to some traveling I cannot make it in for a while. So in the meantime the folks at Four Roses have sent me a couple samples of the Four Roses Small Batch Bourbon and the recipe to create it at home. 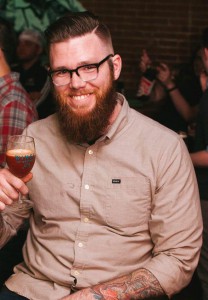 Andrew Olsen of Cleaver and Cork 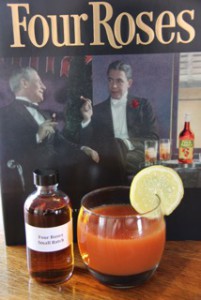 I must say I am pretty impressed with my cocktail making skills.  I loved the citrus notes of the drink and the bourbon is incredibly smooth. Here is the recipe so you can practice your cocktail slinging skills as well.

Lemon Simple is a lemon infused simple syrup.  I made my own by combing equal parts sugar and water steeping in some lemon zest and adding a little fresh lemon juice. The recipe follows.

Zest of one lemon

Combine water and sugar in sauce whisk until sugar is dissolved. Add lemon zest and bring to a boil for 2 minutes. Remove from heat and let steep for 15 minutes.  Strain through mesh strainer and discard zest and any lumps. Add 1/4 cup lemon juice and mix well.  Pour into glass mason jar or storage container of choice. This should keep for about a month in the fridge.

If you have a great food find in KC email me.

Gordon Biersch is now open in the Leawood’s Park Place shopping center. To read more about all the offerings at Gordon Biersch click here.

More information from the  official press release is below.  Photos are courtesy of pitchengine.

Gordon Biersch Brewery Restaurant opened its doors on September 26, 2011 as the only brewery restaurant in Leadwood’s Park Place. Designed to complement their signature lager beers, the Gordon Biersch menu consists of appetizers and entrees with bold international flavors influenced by a variety of cuisines.

The first Gordon Biersch restaurant opened over twenty years ago in Palo Alto, Cali. and has since grown into a chain of over 30 locations in the United States. The Leawood location will be the second Gordon Biersch restaurant in the Kansas City metro. The first location is in Kansas City’s Power and Light District and opened in March 2008. Park Place is one of the only multi-purpose developments in Leawood and is currently entering its second phase of construction.

Toast to Health
Gordon Biersch has partnered with Children’s Center for the Visually Impaired (CCVI) for the events surrounding the Leawood opening. CCVI’s mission is to prepare children with visual impairments, including those with multiple disabilities, to reach their highest potential in the sighted world.

Beers of Interest
Gordon Biersch produces six authentic lagers: Golden Export, Hefeweizen, Czech Pilsner, Märzen (Maert-zen), Schwarzbier, and a rotating seasonal offering. These signature lagers have been recognized at the Great American Beer Festival and the World Beer Cup competitions. Gordon Biersch adheres to Reinheitsgebot (Rine-HEIGHT-ski-bot’) the German Purity Law that dates back to 1516 which declares beer can only be made with three ingredients: barley, hops and water. Interestingly, at the time no one knew that yeast was involved in the process, it was in the air, so yeast has since been added as the fourth ingredient. For the first time ever at a Gordon Biersch restaurant, the Leawood location will have a vast variety of draft beers available from peer breweries in addition to the signature Gordon Biersch beers, including Boulevard Brewing Company, Rock Bottom Brewery and Boulder Brewing Company.

Seating & Hours
The 8,200 square-foot restaurant boasts a main dining area and bar capable of seating 240. There is also a private Märzen room that holds approximately 34 seats with full audio/visual capabilities. In addition, there is a beer garden on the north side of the restaurant that wraps around to the east with a lounge area and fireplace, as well as an outdoor patio on the southeast side of the building. The bar will house multiple high-definition, plasma flat-screen televisions and will also feature a large retractable glass window near the beer garden to create an indoor/outdoor bar environment during warmer weather. Gordon Biersch is open for lunch and dinner seven days a week. Hours of operation are Sunday, 11:00 a.m. – 11:00 p.m.; Monday through Thursday, 11:00 a.m. – 12:00 a.m. (midnight); and Friday and Saturday, 11:00 a.m. – 1:00 a.m. Reservations and private parties are accepted and encouraged. Contact the restaurant for specific dining questions and reservations at 913-451-2379.