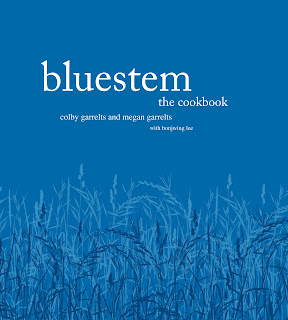 Bluestem: The Cookbook. This cookbook which hit shelves earlier this months is the creation of Chef Colby Garrelts a repeated nominee for the James Beard Award for “Best Chef Midwest,” and highly respected pastry chef Megan Garrelts.

This Culinary power couple who call Leawood home, are chefs and owners of Bluestem Restaurant in Westport, and Executive Chefs at Trezo Vino in Park Place.
With the use of many local and seasonal ingredients, the book has over 100 recipes and is divided into four seasonal sections, each including recipes for appetizers, pasta dishes, dishes from the sea, dishes from the land, and of course desserts. Every recipe showcases local, Midwestern ingredients and artisan producers, which are also profiled in the book.  Breathtaking photos from food writer and photographer Bonjwing Lee capture the simple beauty of Bluestem’s composed dishes.
The cookbook is available at the restaurant, Rainy Day Books in Fairway, KS, Amazon.com and additional online and retail outlets.
Below are couple of recipes from the cookbook courtesy of Colby and Megan.

I don’t naturally take to cranberries. Even when helped along by some sugar, the flavor is often too tart and tannic for me. But I do love the color of cranberries. They provide a cheery blush to the otherwise rusty fall landscape. In this recipe, I round out the flavor of cranberries with orange and spices (and sugar). With a splash of sparkling wine, it becomes a lively, crisp end to an autumn meal. You can also serve the sorbet by itself.
Serves 4 to 6
1 vanilla bean, halved lengthwise
2 cups sugar
4 cups water
2 cups cranberries
Juice and peel (pith removed) of 1 orange
1 teaspoon vanilla extract
2 cinnamon sticks
4 star anise
2 teaspoons freshly squeezed lemon juice
Champagne or dry sparkling wine, for serving
Using the tip of a small knife, scrape the vanilla seeds out of the pod halves into a medium saucepot. Add the vanilla bean pod halves, sugar, 2 cups of the water, cranberries, orange peel and juice, vanilla, cinnamon sticks, and star anise and bring the mixture to a boil over high heat. When the cranberries begin to pop, lower the heat to medium-high and continue to cook for another 5 minutes. Remove from the heat and let the mixture cool slightly. Remove and discard the vanilla pod halves (or reserve for other use), orange peel, cinnamon sticks, and star anise.
Pour the remaining contents into a blender. Holding the lid firmly with one hand wrapped in a kitchen towel, blend the mixture on high speed until liquefied. Strain the sorbet base through a fine-mesh sieve. Stir in the remaining 2 cups of water and the lemon juice. Chill the base for at least 4 hours, or preferably overnight. Churn the chilled base in an ice cream maker according to the manufacturer’s instructions. Freeze the sorbet for at least 2 hours before serving.
Using a small melon baller or a ½-teaspoon measuring spoon, scoop 3 balls of sorbet into a tall shot glass. Top the glass with Champagne and serve immediately with
spicy fig cake
I’m convinced that people who bristle at fruitcake have never had a good one. This recipe will change their minds. Moist and soft, this is the antithesis of those dense bricks that modern mythology has us passing annually from family to family like a hot potato. I particularly love the meaty pieces of dried figs, the seeds of which give this cake a bit of crunch. This cake can also be served simply cut into slices. It needs nothing more than a dollop of fresh whipped cream and a cup of tea. Wrapped tightly in plastic wrap, this cake will keep for up to 3 days. Wrapped in multiple layers of plastic wrap and stored in the freezer, it will keep for up to 3 months.
Makes one 9-inch loaf
10 ounces dried figs
1 cup ginger liqueur or brandy ½ cup
(1 stick) unsalted butter, softened
¼ cup packed light brown sugar
¼ cup granulated sugar
4 large eggs
1 vanilla bean ¼ cup sour cream
3 tablespoons orange marmalade or apricot jam
2 tablespoons honey
1 teaspoon vanilla extract
Zest of 1 orange, grated with a Microplane zester
2 teaspoons grated fresh ginger
1 teaspoon ground ginger
½ teaspoon ground allspice
¼ teaspoon ground cloves
1⅛ cups cake flour
½ teaspoon salt
Confectioners’ sugar, for dusting
Soak the dried figs in the ginger liqueur overnight, covered.
Preheat the oven to 350°F. Butter the loaf pan.
Drain the figs, reserving the liqueur, and dice the figs.
In the bowl of a stand mixer fitted with a paddle attachment, cream the butter and the sugars together on medium-high speed until fluffy, about 3 minutes. Scrape down the bowl with a spatula. With the mixer on medium speed, add the eggs one at a time until incorporated. Scrape down the bowl once more.
Slice the vanilla bean in half lengthwise. Using a small knife, scrape the seeds from the vanilla bean into the batter. Add the sour cream, marmalade, honey, vanilla, zest, fresh and ground ginger, allspice, and cloves and mix well. Scrape down the bowl.
With the mixer on low speed, mix in the cake flour and salt until just incorporated.
Scrape down the bowl and fold in the drained figs.
Pour the batter into the prepared loaf pan. Rap the pan firmly against the counter to remove any air bubbles. Bake the loaf for 40 to 45 minutes, until the surface cracks and a toothpick inserted into the center comes out clean.
Using the tines of a fork, prick the top of the cake all over. Pour the reserved liqueur from the dried figs over the top, letting it seep into the cake.
Allow the cake to cool completely. Flip the pan over to release the cake. Trim the cake with a serrated knife, removing the domed top and shaving the sides and bottom to create a block with squared edges. Slice the block into ½-inch-thick slices and cut each slice into thirds for petits fours–size pieces. Dust them with confectioners’ sugar and serve.