Campus ‘Cue Off and the Big 12 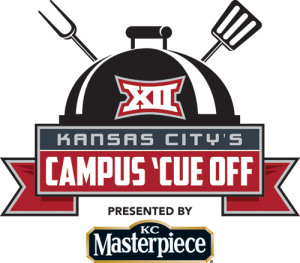 Barbecue and basketball are two of the things that Kansas City does
best and now they’re joining forces with Kansas City’s Big 12
Campus ’Cue Off presented by KC Masterpiece® barbecue sauce. The
competition will pit contestants from around the conference in a
second annual showdown for barbecue bragging rights — featuring
teams representing each of the 10 universities — all while the Big
12 basketball teams compete to be crowned the best on the court.

Fans are invited to come down and cheer on their school’s
contestants as they battle to take home the grand prize and check out
the KC Masterpiece Food Truck to try the latest and greatest KC
Masterpiece flavors, including new Fiery Habanero Honey — for FREE

When is the event?
Kansas City’s Big 12 Campus ‘Cue Off coincides with the Big 12
Basketball Tournament.

The competition area is open to the public during the following times:

Where is the event?
Sprint Center
1407 Grand Blvd
(13th Street and Grand Boulevard)

Additional information:
KC Masterpiece® barbecue sauce was created in Kansas City — where
people love to barbecue — and it’s still the number one selling
sauce there today. For 35 years, the rich taste has grown in
popularity and has become one of America’s favorite barbecue sauces.