Holy Smokes! This is the best cheesecake ever!

Being the foodie that I am, and on the hunt for all things local, I wanted to find out more about them. I needed to see if they would a great local food find so, I checked them out. Wowza!! I am so glad I did.

Just looking at the pictures of them I thought I better get my hands on one of those. So I contacted Chef Terry Mille owner of CowTown CheeseCake Company to find out how to get one. He said they are made to order and that he would be happy to make me one.

Now, I had to pick a flavor. He suggested that since I love Key Lime, he makes a mean Key Lime Cheesecake, but the Sweet Potato Cheesecake is a best seller and that is the one that started the whole business rolling.

Well that settled it; I had to see what the entire buzz was about regarding this Sweet Potato Cheesecake.

Before I go on and on about how yummy it was I will give you a little history on how it came to be. 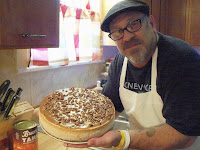 Chef Terry, a Personal Chef and Caterer by trade, was emotionally touched and devastated by Hurricane Katrina in August 2005. His career was flexible and that made it possible for him to join the American Red Cross as a volunteer. He ended up being the Mass Feeding Coordinator at Southern University in Baton Rouge, which was set up as a shelter for hurricane victims. As he served and average of 450 residents 3 meals a day he got to know them on a personal level and fell in love with the region.

As he talked to the residents he learned a lot about the flavors, things they cooked with and what their pantry’s consisted of. They told him about cooking with Sweet Potatoes and how they harvested pecans to sell or make Pralines out of them to sell to the tourist’s in New Orleans for their bread money. They told him about how their Pecan Pies are made with Steens pure cane syrup which is a local product made just outside New Orleans. He says that experience has changed his life forever.

Once back in KC, Chef Terry started playing around with the different flavors he had learned about. Wanting to keep the flavors true to that region Chef Terry decided to use products from there. The Steens Pure Cane Syrup, Bruces Yams, local pecans etc..

After several failed attempts, Chef Terry came up with his “Sweet Potato Cheesecake with a Gingerbread crust and a Praline Topping”. It was Thanksgiving so, he decided he would make the Cheesecake and serve it to the family. Everyone loved it. His wife took a couple of slices into work with her the next day and shared it with some other co-workers and they loved it.

Soon orders began to pour in. Next thing Terry knew he was making a lot of Cheese Cakes about 5-10 a week and CowTown CheeseCake Company was born.

I have to tell you that the Sweet Potato Cheesecake is awesome! I got the cheesecake a few days before a large family gathering and decided to freeze it, knowing that my little family of 4 did not need to eat that much cheesecake and I needed to bring a dish so it worked out perfectly. The cheesecake froze beautifully!!

The Cheesecake was a hit and everyone just raved about how delicious it was and I would have to agree! This cheesecake is delightfully creamy and dense and coverered with a gooey caramel topping made with cream from the local Shatto Dairy. The toasted pecans on top give it a wonderful crunch and really adds some depth to the flavor. The gingerbread in the crust and the hints of cinnamon, clove and nutmeg in the filling make this a perfect treat for fall. Not that this cheesecake cannot be enjoyed all year around because I certainly did, but it would make a perfect accompaniment to your Thanksgiving dinner. 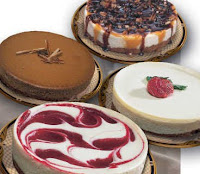 What makes Chef Terry’s Cheesecakes a KC food find I think you are missing? First off it is a locally owned company; second Chef Terry tries to use as many local ingredients as possible including Shatto Milk Company, local eggs and local produce when in season. He is also currently looking into finding a local cream cheese. Third these cheesecakes are fresh and made to order and fourth it is the best cheesecake I have ever eaten.

About being the best Cheesecake I have eaten, there are a few others that would agree with that as well. Chef Terry was a consideration for the reality show Master Chef which is currently airing on Fox. Back in January Master Chef held a casting call in Kansas City, where hopeful contestant brought a signature dish for judges to try. Along with yours truly, Chef Terry brought his cheesecake and wowed the judges. My dish an was a Trio of appetizers. Though both dishes impressed the judges and call backs where made, neither of us made the cut.

And as always if you have a great food find in KC, email me.