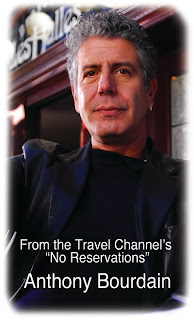 Here is an official press release on Anthony Bourdain coming to Kansas City and how you can have the chance to bid on a meet and greet package.

(Kansas City, July 2011) — Culinary bad boy Anthony Bourdain is taking his delicious show on the road, and now is your chance to get close to the action for this unique lecture-style appearance! Bourdain brings his stories to The Midland by AMC (1228 Main Street) for a special one night engagement on Saturday, October 22, 2011 at 8 p.m.; tickets are currently on sale. Beginning Monday, July 11, 2011 at 11 a.m. fans can bid in an online auction for packages that include premium seats in the first several rows and an exclusive meet and greet with Anthony Bourdain during a private post-show reception. The bidding ends on Sunday, July 24, 2011 at 10 p.m. To purchase tickets and for additional information on the auction, visit Ticketmaster.com.

Chef and author of Kitchen Confidential Anthony Bourdain is best known for traveling the globe on his stomach, daringly consuming some of the world’s most exotic dishes on his hit Travel Channel TV show, Anthony Bourdain: No Reservations. Once known as the bad boy of cooking, Bourdain is settling into an only slightly more dignified position as a professional gadfly, bete noir, advocate, social critic and pork enthusiast. He is as unsparing of those things he hates, as he is evangelical about his passions.

As executive chef at New York’s famed bistro Les Halles, Bourdain is the author of the bestselling Kitchen Confidential: Adventures in the Culinary Underbelly, a candid, hysterical, and sometimes shocking portrait of life in restaurant kitchens that has been translated into over 28 languages. His book A Cook’s Tour, published in conjunction with his series on the Food Network, was also a bestseller in the U.S. and the U.K.

His latest New York Times bestseller, Medium Raw: A Bloody Valentine to the World of Food and the People Who Cook, is an insider’s perspective on the changes in the restaurant business, from Bourdain’s bad old days to the present. His other books include Anthony Bourdain’s Les Halles Cookbook, The Nasty Bits, the crime novels Bone in the Throat and The Bobby Gold Stories, and No Reservations: Around the World on an Empty Stomach, an illustrated journal of Bourdain’s travels.