Enjoy Panettone and Stollen for the Holidays 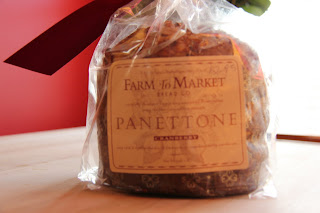 Legend has it that during Christmas one year, a Milanese baker had no dessert to offer to his guests so a mere kitchen boy, called Toni prepared a sweet bread. It was so good, he won the praise and honor of the bakery owner and guests. Due to the praise he was now considered worthy to marry the bakery owners daughter, and that is the story of Panettone, the Bread of Toni!

I received a loaf of Panettone from Chef Jasper Mirabile along with a few recipes. I had a pomegranate to use up and I had good intentions of making Panettone Panzanella recipe featured below. 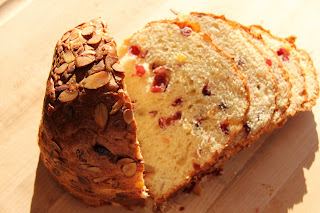 I wanted to try the bread before I dove into the recipe and sliced some up to toast. It was a lazy Saturday morning and it went great with a cup of coffee. Problem is everybody else wanted some too. Well after over half of the loaf had disappeared, I realized I no longer had enough for my Panzanella and wrapped up the rest for later. 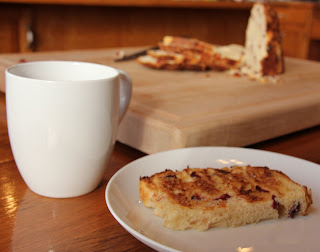 Later came sooner than I thought with Sunday morning the next day, and I used up the rest by making French toast. 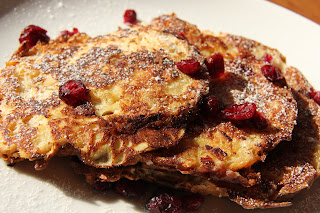 I will be adding a loaf of Panettone to my shopping list so I can try out the Panzanella recipe for Christmas dinner. I think the salad greens, mixed with the cranberries and the pomegranate would make a festive presentation.

Pick up a loaf or two from Jasper’s restaurant or check the Farm To Market website for a list of markets across the metro where the bread is sold.

Try out one of the recipes below courtesy of Chef Jasper Mirabile, or simply enjoy it toasted with a cup of coffee. This is also a great time of year to take a loaf as a hostess gift to your next holiday gathering.

If you have a great food find in Kansas City you think I am missing, email me.

Cut Panettone into cubes. Drizzle with butter and toast in oven until
crispy. Set aside.

Directions
Wash chicken and cut into legs, thighs, breasts and wings. Preheat oven
to 450ºF. Heat olive oil, add chicken and sausage and brown for 10
minutes. Add peppers and onions and cook until onions are translucent.
Place chicken, onions, peppers and remaining ingredients except
potatoes and peas into a large baking dish. Bake 30-45 minutes. Add
potatoes and peas and bake another 30 minutes.

For the stuffing: Preheat the oven to 350°F. Spread the panettone cubes
out on two rimmed baking sheets. In a small saucepan, melt 2
tablespoons of the butter over medium heat and cook until light brown,
about 6 minutes. Remove from the heat and add half the sage. Season
with salt and pepper. Pour the sage butter over the bread and toss
gently but swiftly. Toast the bread in the oven, turning with a spatula
halfway through cooking, until light brown, about 15 minutes. Remove
from the oven and pour the croutons into bowl, leaving the oven on.
Meanwhile, put the dried fruit in a large bowl and add boiling water to
cover. Let soak for at least 10 minutes to make the fruit plump and
soft. Drain and set aside.

Increase the oven temperature to 375°F. Heat a large sauté pan or
skillet over medium-low heat, add the remaining 2 tablespoons butter,
and cook until it foams. Add the onion, celery, and carrot and sauté
until soft, 12 to 15 minutes. Stir in the plumped fruit and remaining
sage, then add to the cooled croutons and gently toss. Add the 1 ½ cups
stock to moisten. Add more stock if you like a softer stuffing. For a
firmer stuffing, stir in the beaten egg now. Taste and adjust the
seasoning. Set aside.

Preheat oven to 400. Cut pannetone into cubes. Mix all ingredients in a
large bowl. Add more eggnog if needed. Butter or spray a loaf pan. Add
mixture to pan. Bake for 45 minutes until golden.