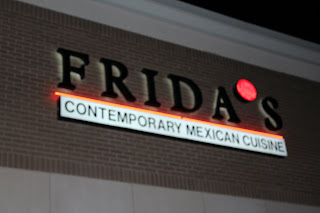 Not Your Average Mexican Fare

The motto at Frida’s is “Expect the Unexpected.” So what exactly does that mean? It means at Fida’s you will not find your usual burrito smothered in cheese and sour cream, but something much more elegant. If you are familiar with Ixtapa or Guadalajara Café, which are owned by the same family that owns Frida’s, you know this is not your average Mexican fare.

I will be the first to admit that I love those cheesy Mexican American combos, because I really do, it is just that Frida’s different, and I mean that in a good way!

When the owner Ivan Marquez came over to check on the table, I commented on all the unique dishes on the menu. He said,” This is how we really eat in Mexico; we don’t use a lot of cheese.” The fare at Frida’s consists of a variety of chicken dishes, fresh seafood, steak, pork and vegetarian items, all prepared in authentic Mexican way.

As I scanned the menu for a starter, the Guacamole Duo practically screamed my name. I love guacamole and it did not seem to out of the ordinary since guacamole is considered traditional Mexican fare. The twist is, one is made with pomegranate and apples. I had to get it just because I found it to be very unusual and sounded so intriguing. I was trying to imagine how in the heck you make something like that. When the guacamole platter arrived, the presentation was beautiful. The traditional guacamole was great and had a wonderful hint of lime, the pomegranate and apple had a much sweeter flavor and much more texture. Both were delicious. I thought the apple pomegranate would make a beautiful dish to take to a holiday party with all red pomegranate seeds against the greenness of the avocado. 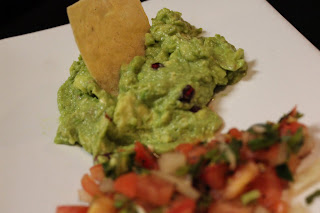 For dinner, the dish I chose was the Pollo en Hoja Santa, which is a charbroiled chicken breast stuffed with goat cheese and squash blossoms wrapped in a hoja santa leaf. Our server explained that the hoja santa leaf is believed to have certain healing powers. Though I was not ill, it seemed to unique to pass up. I also love goat cheese and decided it would be a good choice.

I split this dish with my husband and we were both pleased. The dish is served with steamed vegetables and green rice. The vegetables were cooked perfectly, having the perfect level of “crisp tender” steamed vegetables are supposed to have, and the color against the white plate made a great presentation. 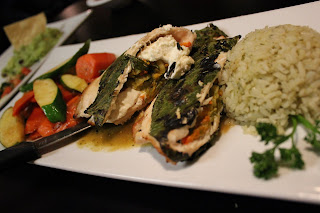 Now about the rice, I really did not mean to devote a whole paragraph to the rice. It was tasty and was filled some unique spices. However, I also like rice and really did not think much of it until my husband tried it. You see for some reason, he is just not a big rice fan. He loathes the red rice that comes with your typical Mexican fare and says, “Rice is for Chinese food.” Therefore, I was surprised when I saw that he was trying it and then even more shocked when he said, “That rice is really good.” So if he likes you know it has to be good!

The chicken was moist and the goat cheese was salty and creamy. Those flavors most people are familiar with, but the hoja santa leaf not so much. I kept thinking it tasted a little bit sweet and like something, I have had before. As I was eating the leftovers the next day, and still could not put my finger on it, I used the power of Google and searched “hoja santa leaf flavor.” The results came up and I chose a sight that was about plants and herbs. The description about the hoja santa leaf mentioned the healing powers which our server had mentioned and that the flavor is compared to root beer. I am not much of a soda drinker these days and it has been years since I have had root beer, but that was it! I was so glad to have solved the mystery flavor. If you enjoy that salty sweet flavor combination, I recommend the Pollo en Hoja Santa.

I had my camera with me and of course was taking pictures of all the food. Ivan asked if I was with a magazine. I told him no, but that I wrote a blog about locally owned food finds in Kansas City. As generous gesture he gave us a complimentary dessert. It was Especiales de Atole which is a homemade corn milk ice cream. The topping of goat milk caramel and toasted nuts, gives this dessert a rich and creamy texture with a little crunch. Our server described it as a mix between gelato and ice cream. On the menu, it is hailed as their most successful mistake. Evidentially, it came about from a mishap one night in the kitchen. Ask your server to tell you the story. 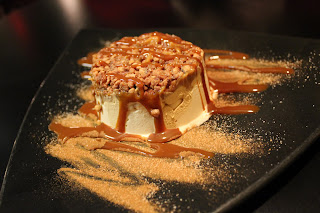 Named after the famous Mexican painter Frida Kahlo whose work is described to have featured intense and vibrant colors, Frida’s food, and décor are along those same lines. 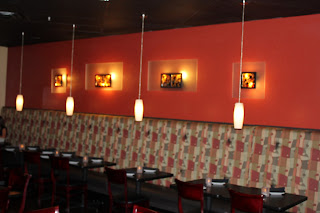 The building is adorned with paintings, colorful light fixtures, and vibrant orange walls. The food is presented in a beautiful fashion and is truly a piece of art. The vegetables are a mix or vibrant orange, green and yellow that pop against the white plates. The dishes are also arranged in such a way that they are almost too pretty to eat. If the saying, “we eat with our eyes first” truly meant that, you would be stuffed even before your first bite!

If you have a great food find in KC you think I am missing, email me.