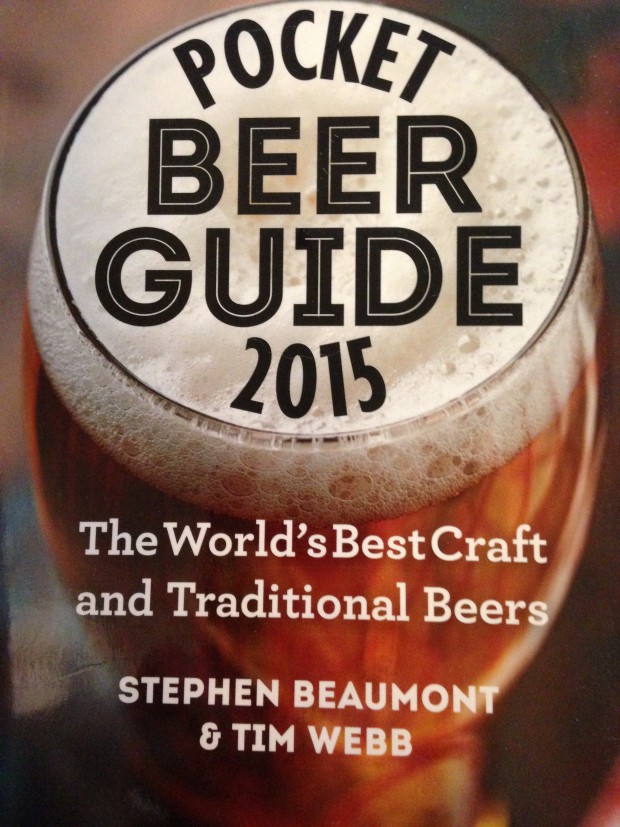 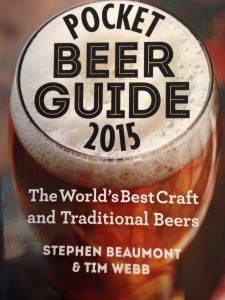 In honor of Kansas City Craft Beer Week and the KC Craft Beer Week Dinner at the Flying Saucer hosted by Stephen Beaumont on June 14, I am giving away The Pocket Beer Guide 2015 courtesy of FireFly Books.

The Pocket Beet Guide 2015 by Stephen Beaumont and Tim Webb covers 3,500 of the world’s best craft and traditional beers.

To enter all I ask is to simply comment as to what your what your favorite beer is.  It’s that easy!

Winner will be drawn using random.org and be notified via email, so be sure to leave a valid email contact with your entry!

You can check out Stephen’s Bio below as well as information on the KC Craft Beer Week Dinner.

Once described as “beerdom’s Brillat-Savarin,” Stephen Beaumont is today one of the world’s most authoritative voices on beer, as well as a widely recognized writer on spirits, food and travel.

As co-author of both The World Atlas of Beer (2012), published in ten international editions, and two editions of The Pocket Beer Guide (2013 & 2014), Stephen has amassed an unparalleled understanding of what’s going on in the fast-paced and expanding world of beer today. If there is good lager or ale to be had, whether in San Francisco or Singapore, Montreal or Milan, Stephen knows about it, and has most likely sampled it!

In addition to The World Atlas of Beer and The Pocket Beer Guide, Stephen has authored or co-authored eight other books, including two editions of The Great Canadian Beer Guide and his forthcoming Beer & Food Companion, as well as contributing to nine others, including the immense 1001 Beers You Must Taste Before You Die; the literary tribute to legendary drinks writer Michael Jackson, Beer Hunter, Whisky Chaser; and the just-released Handbook of Porters & Stouts.

Stephen also authors regular columns for publications as diverse as the spirits quarterly Whisky Advocate and Canada’s beer magazine, Taps, the U.S. hospitality industry standard Nation’s Restaurant News and the foodie favourite City Bites. Additionally, he serves on the editorial tasting panels of both Taps and All About Beer magazines, and contributes to a variety of other publications, including Fine Cooking, Saveur and DRAFT Magazine.

When he is not writing about or tasting beer and spirits, Stephen travels the world talking about them, at a beer dinner in Toronto, a seminar in São Paulo or a competition in Brussels. He has worked on the beer and beverage programs of a large number of corporations, including Starwood Hotels and Resorts, the Walt Disney Company and Crystal Cruises among many others, and appears regularly at conferences such as VIBE and the International Wine, Spirits and Beer Event. In 2009, his influence was recognized with the Cheers Magazine “Raising the Bar” award for his “noteworthy and sustained contribution to the world of beverage alcohol.” 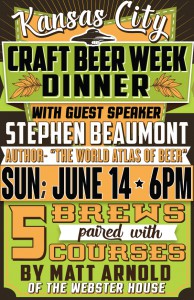 This 5-course dinner will include 5 beers paired with an incredible meal chosen by Chef Matt Arnold from The Webster House. There will also be a pre-dinner tasting with Stephen beforehand.
Order tickets by calling (816) 221-1900 or purchase at Flying Saucer. There are different options for tickets. There is a pre-tasting with Stephen Beaumont that is $20 and tickets for the dinner are $55 for UFO members/$65 for non-members. If you want both, it is $65 for UFO members/$75 for non-members.
Beer Dinner with Stephen Beaumont at the Flying Saucer
Sunday, June 14, 2015 at 6:00 pm
Flying Saucer
101 East 13th St
Kansas City, MO 64106