JULIAN and Food Network’s The Next Iron Chef 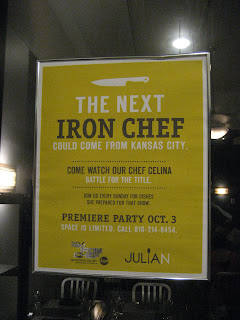 Gourmet chef driven food you get to eat in your flip-flops!

The restaurant JULIAN has been on my list of places to go. I have heard of the innovative cuisine chef Celina Tio makes and that she is known for using local and seasonal ingredients, which is one of the things I look for when choosing a place to dine.

I have compiled quite a list and thought, “I will get there eventually” until I received a certain email that was from Food Network. They had found my blog and asked if I would like to interview Celina about her upcoming appearance on their show The Next Iron Chef. Hmmm let me think, uh yeah!

Once I found out I was going to be interviewing Celina, I moved it to the top of my list and headed to Brookside. While I was there, I was hoping I would have the opportunity to meet Celina before the interview that was coming up later that week.

It was a beautiful evening and we sat on the patio. The atmosphere at JULIAN is what I call “gourmet casual.” You get gourmet chef driven food that you can eat in your flip-flops. There servers are in jeans and the food is simple and delicious. 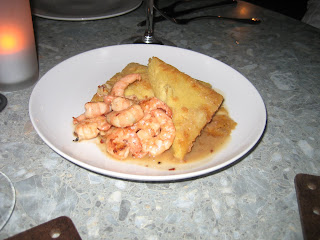 We ordered an appetizer, which was “gambas al ajillo” Laughing Bird shrimp with spicy garlic sauce on, panise. Now, if you have read the blog you know I am not a huge seafood fan but I don’t mind shrimp. I had no idea what panise was, but my sister wanted to try it. Wow! It was pretty darn tasty. The spicy garlic sauce was great and panise is a fried chickpea flour cake. I love it when I find a new food. Now I know I will want to order panise whenever I see it on a menu somewhere, or better yet learn to make it myself so I can have it anytime. It was delicious! 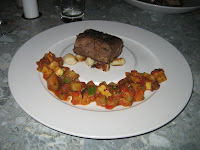 For dinner, I chose the braised short ribs, potato gnocchi, and ratatouille. The short rib was so tender. The minute I pressed down with my fork it practically fell apart and gnocchi is one of my favorites.

The other dishes we had where herb crusted Duroc pork loin with peppers and potatoes and JULIAN short rib sandwich with horseradish-havarti, caramelized onion, and Dijon. The sandwich was a new addition to the menu for the evening and I hope it stays. When my sister tasted it she said, “I would come back just for that.” 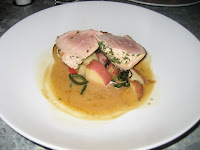 All of the dishes were exceptional and I did have the chance to meet Celina and introduce myself, as she is the one that brought our plates out. She truly is involved in every aspect and makes you feel as if you are a guest in her home.

I was honored to be able to chat with Celina about JULIAN and The Next Iron Chef experience. 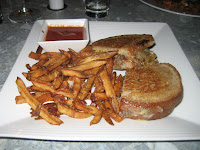 Having been a chef at the Philadelphia Ritz-Carlton and then working for Walt Disney World where she helped open two specialty restaurants, Celina wound up in Kansas City when she saw an ad for the chef position at the American. While working at the American, she garnered local and national accolades including 2005 “Chef of the Year” by Chef Magazine and the James Beard Foundation’s 2007 “Best Chef: Midwest.” 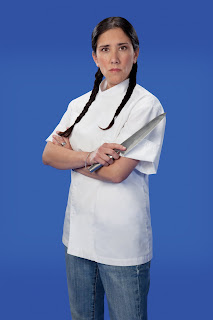 In opening JULIAN, Celina said she always liked working at the American, but is very outgoing and wanted a place where she could be involved in every aspect…and involved she is! As well as cooking, you will find her bringing out plates and refilling water glasses as she mingles with guests. She says, “I usually talk to all of them if possible.” Celina also said she wanted to have a place where she could serve gourmet chef driven food in a casual environment, make patrons feel as if they where a guest in her home, and “Where it is ok to wear a T-shirt, jeans, and flip-flops and come in just because it is Tuesday instead of waiting for a special occasion.”

Regarding the cuisine at JULIAN, Celina’s focus is on soul satisfying comfort foods using fresh, seasonal, and local ingredients that are refined with a signature twist. One of Celina’s favorite dishes she makes at the restaurant is crispy pork shoulder. Depending on the season, it is served with various seasonal ingredients such as, sweet potatoes and house made marshmallows or succotash and bacon vinaigrette. She is currently working on recreating a tamarind sauce to serve with the pork that she tasted on her Next Iron Chef adventure, which was made by her fellow contestant Chef Maneet Chauhan, who owns Vermillion restaurant, which has locations in New York and Chicago.

On being true to the concept of using local and seasonal ingredients, Celina works with dozens of farmers in the metro area and uses only naturally raised meats. She also uses Shatto milk products and serves up Boulevard beer and coffee from the Roasterie. She makes about four major changes a year to the menu with little tweaks here and there when needed.

To keep things fresh, Celina is in the kitchen making house made sauces, ketchup, pickles, ricotta, and her version of a burrata, which is handmade mozzarella that is filled with ricotta and cream. A traditional burrata is mozzarella scraps with cream in the center of mozzarella. The name “burrata” means, “buttered” in Italian. She also house smokes the salmon and bacon and corns her own beef for the corned beef that is served.

On what makes JULIAN special, Celina believes it is her concept of chef driven food that is easy, and prepared with love, noting, “I think you can taste the love that has gone into preparing the plate.”

On Sunday’s Tio offers, “Sunday Family Meal” which is a dinner that includes one of her signature dishes or highlights a “Diner Designed Dinner” which is a dinner that a guest will submit and then have the opportunity to work with Celina to create. However, while the show is airing she is hosting watch parties for The Next Iron Chef. The dinner menu features the dishes Celina made for that episode. Seating is limited and some dates are sold out. If you are interested in attending a watch party, it is best to call to see if space is still available. Cost is $35.00. The number for JULIAN is 816-214-8454. 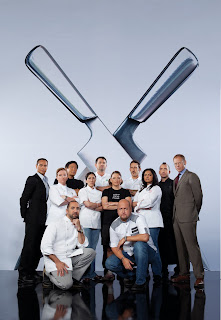 Specifically about the show, Celina received a call (unexpectedly) from Food Network to see if she would be interested in doing the show…and she was. After a series of meetings and an on camera interview, she was chosen to be a contestant. Celina said, “It was the most difficult thing I’ve done; it was one of the most fun things I’ve done.” Other than that, she is pretty much sworn to secrecy.

I did get a few insights on the first episode. The secret ingredient is bread and the contestants challenge was to make a sandwich that represents them. Celina did a play on a Cuban sandwich. Another part of the episode takes place on the beach. As far as other competitors go she said, “All of the contestants got along well.” She also noted that the show is as hectic as it looks on television.

I have got wind from another source that some of the other episodes secret ingredients include pickles, donuts, fair food, ranch dressing, and potatoes.