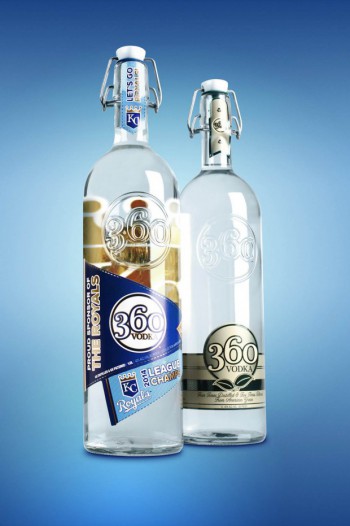 Here is info on the official press release concerning the new Kansas City Royals Limited Edition 360 Vodka Bottle.  I was just with a friend last week at Costco where she picked up a bottle for a gift for her son in law. It is really a beautiful bottle and  makes a great keepsake for any Royals fan.

“As Kansas City’s hometown vodka, we wanted to honor our hometown team with a bottle that pays tribute to their outstanding performance,” said Vic Morrison, VP Marketing for 360 Vodka.

The multiple award winning 360 Vodka will have a large presence at Kauffman Stadium this year and continue to celebrate their hometown team with signature Royals cocktails, which will be served throughout the stadium and at the new 360 Bullpen Bar.  The recipes for each cocktail will also be shared on their Facebook page to ensure fans can enjoy them at home too.

Premium and smooth with a clean finish, 360 Vodka crafted the commemorative Royals bottle using locally sustainable materials and a reusable swing-top closure.  For each closure returned to the distillery, 360 Vodka will make a donation to “Royals’ Charities.” Return envelopes can be requested from www.vodka360.com

This limited edition, commemorative bottle is widely available at all retailers in Missouri, Kansas, Iowa and Nebraska.

As Royals fever hits, several major retailers have already set up large displays of the specialty bottle which retails for approximately $12.99 (750ml) and $19.99 (1.75L).  These bottles are available for a limited time only, so Royals fans of legal drinking age are encouraged not to wait until the last second to pick up their commemorative bottle.