I recently had the chance to tour the McCarty Family Farms who supply fresh milk for Dannon Yogurt. This tour included some other farms in Kansas as well and you can read more about that here.

Located just a few miles from Colby you will find Rexford, Kansas which is home to the McCarty Family Farms, where we met Ken McCarty. He graciously shared the story of the his family farm which was started in 1914 by his Great Grandfather with eight cows in Pennsylvania. 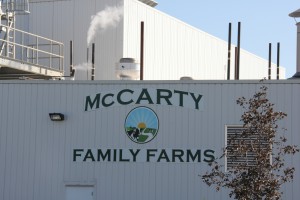 Ken and his three brothers Clay, Mike and David are fourth generation dairymen who worked with their dad on the dairy farm in Pennsylvania. It came time to move the dairy if it was going to be profitable, so after searching throughout the Midwest, they settled in Rexford, Kansas in April of 2000.

They started milking 1200 cows which did not show much profit but plugged along eventually building another milking facility in Bird City, Kansas.

The McCarty’s big break came when they were approached in April of 2010 by Dannon Yogurt to produce milk for them. In order to do that the McCarty’s had to double their size and build a processing plant. They broke ground to build a new facility and had milk to Dannon in April 2012.

The McCarty’s now own four dairy’s with one in Beaver City, Nebraska and the others in Kansas including Scott City, Bird City and the processing plant/dairy in Rexford, where it processes all the milk from the 4 farms yielding about 650,000 pounds of raw milk a day. The farthest the milk travels to be processed is 80 miles which is milk from their Nebraska plant. There are about 140 employees between all the of the plants and business office which is located in Colby.

All the raw condensed skim milk goes to the Dannon plant in Dallas along with a portion of the heavy cream. The remaining cream is sent to the Daisy brand processing plant in Garland, Texas where it is made into sour cream. 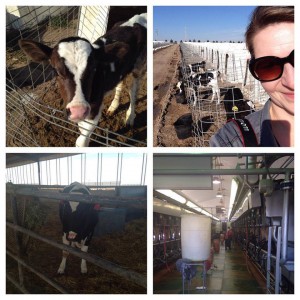 If you check the bottom of your Dannon yogurt cup and it has plant number 48 stamped on it, most likely it is made from the McCarty’s milk which goes from the dairy to Dannon in 24 to 36 hours. I love eating local and knowing that a national brand I buy is using local milk from my home state makes me want to buy it even more!

All four dairies are certified by Validus, a major animal welfare firm that has very stringent guidelines on the care of dairy animals. They have also passed bio security audits, food safety audits and enviromental audits.

I was a bit concerned about going to a farm that produces milk for a major company thinking that the cows would be laying on top of one another covered with muck, but just as the case with the other farms on this tour this was totally not the true. 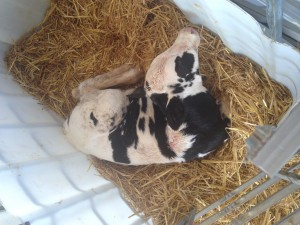 Spreading the cows over 4 dairies gives them the freedom to roam and the McCarty’s the space and resources to care properly for the cows. The baby calves are kept in separate pens to avoid being trampled, hurt or killed by any of the larger cows in the heard. Their spaces are kept clean and tidy with plenty of food and water. The larger cows are free to roam around in various pens around the dairy until they are taken to be milked. 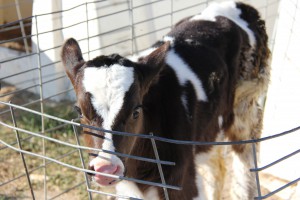 The cows are milked three times a day. Once milked which only takes 11 minutes, are then out free to roam again. Clean, comfortable and happy cows produce more milk and the McCarty’s work hard to ensure the cows meet that criteria. The cows are checked daily, the holding beds are cleaned three or more times a day, the cows are given plenty of space to freely move around and are fed a nutrient rich diet. The cows are NOT given RBST and only an antibiotic if it is medically necessary. If a cow then happens to need one her milk is not used until the medicine is out of her system. 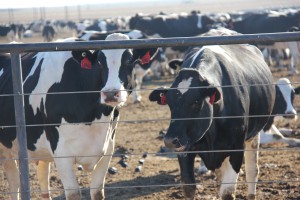 Finding out the McCarty Family Farms is considered a “factory farm” totally changed my perspective on things. I am sure there are exceptions to the rule but I certainly will not have nightmare visions anymore when I here the term factory farm. I have so much more respect for the farmers as they go above and beyond to ensure the cows are well taken care of and the procedures they go through to make sure the milk is the highest quality as possible.

Be sure to check out the videos on the McCarty Family Farms website where you can watch how the cows are milked and learn more about the farm.