Chocolate Maker Alan McClure has always had a passion for food, even at the young age of 13 you could find him at home making home-made croissants, while other kids his age were out playing. His obsession with chocolate came after he had tasted some dark French chocolate that his father had brought home following a trip to Europe. 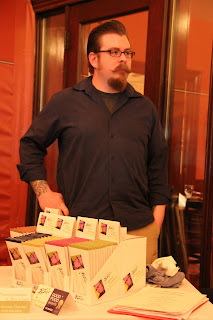 While attending the University of Missouri in Columbia, Alan met a fellow student from France, who later became his wife. The two moved to France and that is where Alan dove into the world of chocolate. He visited the Lyon-based chocolate maker Bernachon, which inspired him to learn all he could about the craft of chocolate making.

Once back in the States in 2004, Alan began his self-taught journey on chocolate. After a couple of years of learning about cocoa beans, roasting techniques, the chocolate making process and countless hours preparing batches, Alan McClure started Patric Chocolates in 2006 and had his first bar packaged and ready for shelves July 23rd, 2007.

Patric Chocolate is known as bean to bar chocolate. This means everything is made in house starting with roasting the beans. Alan starts by roasting the cocoa beans himself and actually making the chocolate before it is ever molded into a bar. He is considered a chocolate maker as opposed to a Chocolatier who is one that works with chocolate. 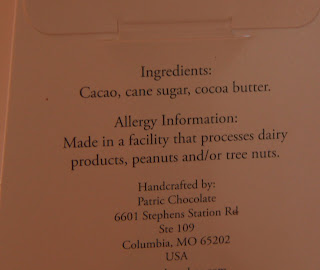 Each micro batch of chocolate is handmade by Alan and most bars have only 3 ingredients which include Cocoa beans, cane sugar and cocoa butter. The exception is the Signature Dark Milk Bar Patric offers, which of course contains milk, and the PB&J OMG, which has natural peanut butter. There is no fruit in the bar; the roasting technique Alan uses brings out the fruitiness in the cocoa beans, which then flavors the chocolate. 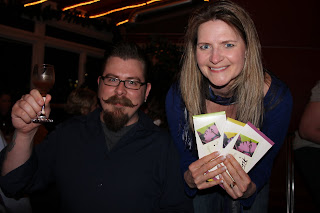 I had the opportunity to meet Alan McClure at a special dinner Chef Jasper Mirablie had at Japser’s Restaurant. The dinner was called “A Chocolate Experience.” It was a five course meal that included chocolate in each dish. To read more about that click here.

Alan had his bars for sale and I stocked up. I always keep a stash of chocolate just in case of emergency’s and will take a nibble of it here and there over time. One chocolate bar will usually last me a few weeks. 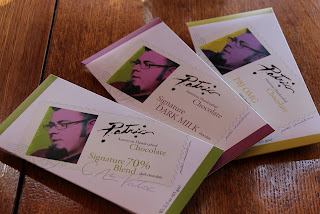 As a peanut butter lover, I was so excited the try the PB&J OMG Bar and OMG was it so good! Before I knew it, half the bar was gone. I had to put it away but broke it out the next day and as you can see from the photo I polished it off. The bar has the perfect amount of nuttiness and the roasting technique brings out the berry flavors, no jelly is used. This bar is only available in late fall to early February so it truly is gone. It is a unique and delicious bar.

The half-eaten bar in the photo is the Patric’s Signature Dark Milk. I am really trying to pace myself on this one. It is light and creamy with that depth and taste dark chocolate should have. The third bar is Patric’s Signature 70% Blend. As you can see it is still unopened as I am trying to savor these bars, however I cannot guarantee how long that might last as an emergency chocolating can erupt at any moment in my house. 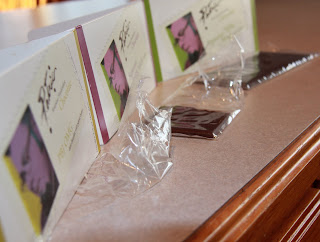 Patric’s In-NIB-itable Bar was awarded a Good Food Awards Seal at the 2011 Good Food Awards in San Francisco this month. The Good Food Awards celebrate artisan producers who are turning out delicious, authentic, and responsible food in seven categories: beer, charcuterie, cheese, chocolate, coffee, pickles, and preserves. This award was based upon a blind tasting of 115 chocolate entries. Way to go Alan! 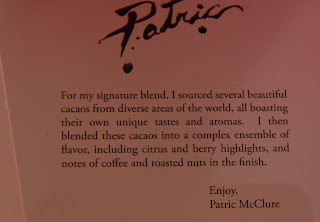 Patric Chocolates have a variety of bars available to purchase including a bar he collaborated with Kansas City’s own Christopher Elbow. His bars are available at the Better Cheddar in Kansas City, various stores throughout St. Louis and online. Visit Patric Chocolates.com for more information.

If you have a great food find in KC you think I am missing, email me.