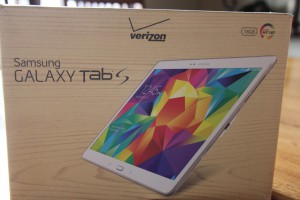 Over the past few months Verizon Wireless has loaned me out a variety of phones, tablets and technical devices to try out. All of them have been fun to use and pretty nifty but after demoing the Samsung Galaxy Tab S they recently loaned to me, I have found it has some pretty cool features that were not quite as good as the other tablets or did not even feature at all.

Below is a list of a few of my favorite unique features of the Samsung Galaxy Tab S.

Screen Dispay: The display is ultra vivid and colorful. The tablet features a Super AMOLED® display that is better than HD on a stunning 10.5-inch screen.

Touch Screen: The increased touch sensitivity setting allows you to use the tablet while wearing gloves.

Voice Commands: The tablet has settings to wake it up using voice commands. The camera settings also allow you to set up voice commands for photo taking so now no one will be left out of photo! Just prop the tablet up so everyone is in the shot and say cheese, capture, smile or shoot and the photo will be taken. You can also say record video if you wish to have a video taken.

Aesthetics: The tablet is light and easy to hold. Weighing in at less than a pound, the Galaxy Tab S is also ultra thin at just 6.6 mm.

Finger Print Scanner: Unlock the tablet by swiping your finger across the home button.

Multi-User: This setting allows the tablet to be used by multiple people while keeping each individuals information separate and private. The Mulit User setting allows up to eight users with three finger prints per person.

Entertainment: The Papergarden features a variety of magazines you can read directly from the tablet. Samsung TV allows you to watch television, movies and variety of videos. It also can connect with your television to become your remote and TV guide. In addition, there are plenty of gaming, music and other entertainment features. 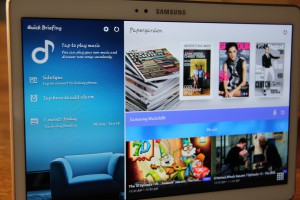 Side Sync: If you have a compatible Samsung Galaxy smartphone you can link it to the tablet and view your phone screen on the tablet and even make and receive calls from the tablet.

Multi-Task: This setting allows two windows to be open so you can browse the web while checking email or research other information and projects on your tablet while working in a separate application. 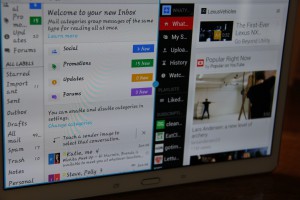 Font: This is a fun setting that allows you to change the font display of the tablet. 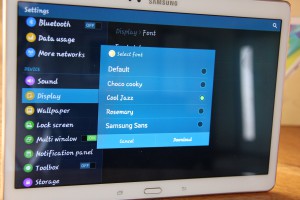 Tool Box: This is a customizable floating icon that allows you to access applications quick and easy without having to close out a current application you may be working in.

Power Saving Mode: If you are short on battery life, this feature will power down the device into a black and white screen while still allowing web browsing and access to a variety of applications making the tablet last for a few more days or even weeks.

There are a plethora of other features this tablet holds and I found it fun and easy to use. The portability and features of this tablet made it a great travel companion over the holidays allowing me to pass time in the car while on a seven hour drive to Denver by watching TV, shows, reading magazines, playing games and of course being able to pull up directions and search for nearby restaurants and lodging when needed. It is of course equipped with all the standard Android features and apps you would have come to expect and then some!

For all the tech specs, pricing or purchasing information please refer to the Samsung or Verizion Wireless websites.