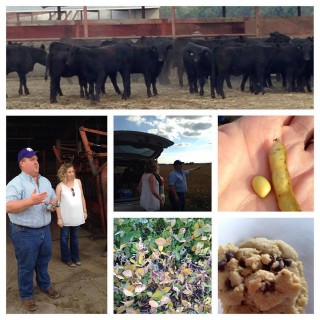 McPherson, Kansas is home to Sawyer Land and Cattle where Derek and Katie Sawyer grow soybeans and are raising cattle for steakhouse quality beef. I visited this farm while attending a three day farm tour across Kansas which you can read about here. 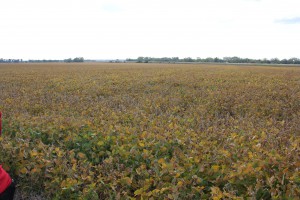 The Sawyer family has been farming for 80 years and have benefitted from the technology advances of farming. They buy their soybeans from Pioneer which is a GMO seed. They compare Monsanto is to farmers as Apple is to consumers, meaning we don’t have to buy an iPhone or they do not have to buy a GMO seed but with all the all the work they have done to put the technology in place to make their crops better, it is hard not to take advantage of that.

Their soybeans are grown for mostly for feed which they sell on a global market. Being a GMO seed makes them a bit more pest resistant which means they are not treated with pesticides very often. Derek explained that if a pesticide is used there is a waiting period after the pesticide is applied before the plat can be harvested which helps ease my conscious a bit.

Those of us on the tour who are against pesticides and GMO grilled him on some issues concerning GMO, pollution and other environmental factors and asked how he felt about in terms of it affecting his own young family with another on the way and  if was he concerned about risks. 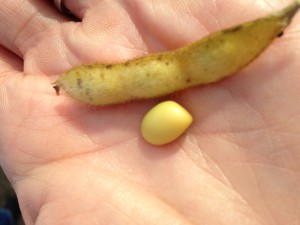 His response was “Obviously it hard to predict the future, but from what we knows now this is the best way we can produce food for the general public.” He did note that before having children he did not think so much about the food as it was feeding the masses, but now that he is feeding it to his own son does take more things into consideration. He notes that it is always going to be a challenge to prove anything is 100% safe but with what he knows now and the practices he uses, he would have no concerns that it is anyway unsafe to feed his family and does.

Just down the street is Derek and Katie’s cowherd where they raise beef for high end restaurants and steakhouses where you pay $40 to $50 for one steak. 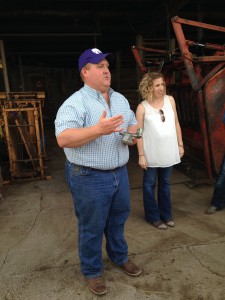 We had the chance to meet their new heard he just received the day before we visited. The cows were a little fussy as they were just separated and wanted their Momma’s. This weaning process makes the calfs fussy for about 3 days and then all is good. It is also the best way for both momma and calf, as the momma would continue to nurse draining her of all her nutrients and the calf needs to learn to eat the grain to grow properly.

Although, the Sawyers grow soybeans for feed, they do not typically feed their soybeans to the cattle as they don’t possess the ability to grind the beans. The cattle are fed some type of mixture of corn, grasses, hay/alfalfa and distillers (an ethanol by-product). All of this except for the distillers is grown on their farm and remains on their farm from the field to the feed bunk. The exact feed mix is determined by the gender, age and nutritional needs of the animal.

Derek runs about 600 calfs a year and once the cows are around 600 pounds they are custom grazed throughout the spring and summer in small towns around Emporia, Kansas where they will beef up (no pun intended) to about 800 – 850 pounds. The cows are then taken to Ellinwood, Kansas to a feed lot for a 120 days where they will end up around 1300 pounds. The cows are then taken too Garden City or Dodge City for harvesting.

The calfs at Sawyer farms get a hormone implant in their ear that releases a small amount of estrogen that helps convert the feed to muscle. The controversy on the hormone use is it gets into the meat. Derek explained that a serving of a steak with estrogen will have about four nanograms of estrogen while the beef without only contains two. That seems pretty low for both as he mentioned cabbage has 15,000 nanograms! The hormone also helps the animal grow faster resulting in a more tender cut of beef.

As I mentioned earlier about the waiting period after pesticide has been applied to a crop, the same applies if an animal has been given antibiotics. The Sawyers take their responsibility very seriously about raising the best beef as possible and will never give a cow an antibiotic just for the heck of it but if a cow gets sick, it is their job to take the best care they can of that animal. If that means it needs an antibiotic on occasion to help the cow heal instead of just letting illness make it sicker and sicker they will do that. Kaite explained that taking care of the animal quickly also ensures the health of the others in the heard because just like kids can spread things at school the same can happen to a heard. Records and documents are also kept on which cow received what and when so there is never a question on anything. 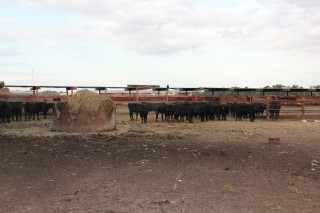 Just as it was at Good Farm (another stop on the tour), the Sawyer farm was clean and the cows had plenty of room to roam. I cannot say enough about the care the Sawyers give to the animals as they monitor them multiple times a day and during calving season it is a 24/7 operation so if a cow of calf needs assistance they are there to help. If needed, Katie even lets distressed calfs into their house and where she can warm them up with extra blankets and a hair blow dryer.