Spin Pizza to Open on the University of Central Missouri Campus

Award-Winning Pizzeria to Open in Innovative

Below is information from the official press release on the opening of Spin at the University of Central Missouri.

KANSAS CITY, MO (March 26, 2014) Award-winning SPIN! Neapolitan Pizzaplans to open a location in the new mixed-use student housing/retail project on the University of Central Missouri (UCM) campus to serve students, faculty,staff, and the local Warrensburg, Mo. community. Expected to open in August 2015, the 116 W. South St. location will have more than 100 seats, a bar, and a full patio overlooking the football stadium.

With a raft of national and local awards for its food and concept, SPIN!® Pizza is known for its exceptional, artisan food made from fresh ingredients without the gourmet price and its eclectic, affordable premium wines. SPIN!’s homemade soups, made-from-scratch salad dressings, as well as its pizza toppings and ingredients are prepared fresh daily from fresh produce and meats. SPIN! also offers an array of appetizers, soups, amazing salads, signature Panini and Italian deli sandwiches, and all natural gelato ice creams.

SPIN! will be located in an innovative new 185,000-square-foot mixed-use facility at the current site of the UCM General Services Building on the north side of Audrey J. Walton Stadium at Vernon Kennedy Field. The largest capital project in the university’s history, the project is part of UCM’s commitment to the Learning to a Greater Degree Contract, a tool to increase undergraduate completion. 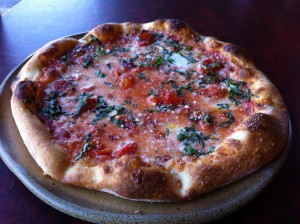 Once completed, the facility will serve as a new front door to Warrensburg’s downtown community, and include a living center consisting of 325 beds for upper-class students, two- and four-bedroom units, and retail offerings that include a new University Store, a convenience store, SPIN! Pizza, and Starbucks. Other special features include a number of spaces for social interaction, including small window seats, two-story lounges, large community rooms, and an events plaza.

“The University of Central Missouri looks forward to its new relationship with SPIN! Pizza,” says UCM President Charles Ambrose. “SPIN! Pizza is an exciting new partner in the creation of a living and learning center on our campus that will be part of taking learning to a greater degree. It’s the type of gathering place our students will enjoy, but it’s also the kind of enterprise that will make UCM a destination spot for members of the Warrensburg community.”

SPIN! opened its first location in Overland Park, Ks. in 2005 and has six Greater Kansas City locations celebrated for their commitment to the communities they serve. Gail Lozoff, one of four partners who own SPIN!, says they are excited to be part of the pioneering new project. Their goal is for the Warrensburg SPIN! to be a great gathering place for both students and families.

“We look forward to being part of the Warrensburg community – from the students, faculty and staff to Mules fans and local residents,” Lozoff says.

Named one of the “Rest of the 101 Best Restaurants” in the nation by top foodie website TheDailyMeal.com, SPIN! ‘s Margherita Pizza was crowned one of the best dishes of the year among all the restaurants in the nation by Restaurant Business magazine, it’s ranked number one by Zagat among Kansas City pizza restaurants, it has been named Best Pizza by numerous Greater Kansas City publications, and it’s been awarded Best Gluten-Free Menu. SPIN!’s recipes are created in collaboration with James Beard Award-winning Chef Michael Smith.

SPIN! offers a diverse selection of hand-spun, stone-fired traditional thin-and-bubbly crust, rustic whole wheat, and gluten-free pizzas. SPIN! takes the unique step of boosting the flavors by roasting all toppings and ingredients in its stone hearth ovens each day, including mushrooms, caramelized onions, artichokes, and even capers, pecans, pineapple, pine nuts, and pancetta.

SPIN! offers both traditional Pizza Rossa (red pizzas with crushed tomato sauce) and Pizza Bianca (white pizzas with roasted garlic olive oil glaze), and many hand-grated cheeses. SPIN!’s pizza dough is made fresh every day using several types of flour including one specially imported from Italy, and its gluten free crust is renowned for its flavor and texture.

In addition to its food, SPIN! is renowned for its rotating roster of affordable premium wines priced well below traditional restaurant prices. SPIN! also makes homemade white, red and blood orange sangrias and offers a selection of craft beers.

Award-winning SPIN! Neapolitan Pizza is known for its exceptional, artisan food made from fresh ingredients without the gourmet price and its eclectic, affordable premium wines. Named a 2013 Breakout Brand by industry authority Nation’s Restaurant News, SPIN! was named one of the “Rest of the 101 Best Restaurants” in the nation by top foodie website TheDailyMeal.com. Its Margherita Pizza was crowned one of the nation’s best dishes of the year by Restaurant Business magazine, its architecture won Best of Show at the Mid America Design Awards, and it was named a “Top 100 Movers and Shakers” by Pizza Marketplace. Ranked number one by Zagat among Kansas City pizza restaurants, it has been named best pizza by every major Greater Kansas City publication. SPIN!’s menu is created in collaboration with James Beard Award-winning chef Michael Smith. Founded in 2005, SPIN! has six locations in the Greater Kansas City area and franchises in Southern California and the San Francisco Bay Area. This is the second national concept created by SPIN! partners Gail and Richard Lozoff, Edwin Brownell, and Michael Kramer, who are experienced in large multi-unit expansion, franchising, and operations. www.spinpizza.com.

About the University of Central Missouri

The University of Central Missouri is a comprehensive university that serves approximately 13,000 students, including those enrolled on its main campus in Warrensburg, Mo., and students taking classes at its extended campus facility, the UCM Summit Center, in Lee’s Summit, Mo. Committed to learning to a greater degree, UCM prepares students for professional careers through opportunities that include engaged learning, future-focused academics, a worldly perspective, and a culture of service