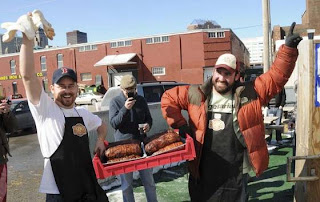 Jason Day and Aaron Chronister, owners of BBQ Addicts and authors of BBQ Makes Everything Better (Scribner), were awarded “Best Barbecue Cookbook in the World” during the 16th Annual Gourmand World Cookbook Awards held at the historical Theatre des Folies Bergère in Paris, France on March 3, 2011.

BBQ Makes Everything Better was first awarded “Best US Barbecue Cookbook” in a national competition which then qualified the cookbook to represent the United States in the “Best in the World” competition. More than 8,000 books were received from 154 countries and juried for 53 cookbook categories and 23 drink book categories. 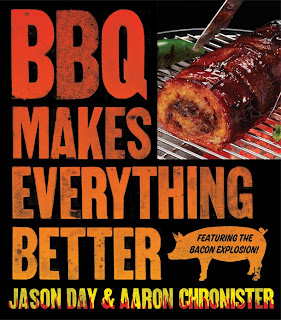 The world famous Author and Lee’s Summit’s own Jason Day will demonstrate how to make and grill the “Bacon Explosion” just as he showed Matt Lauer during his interview on NBC TODAY Show. Jason has appeared on numerous national television and radio programs and will be autographing copies of his first Culinary Book: BBQ Makes Everything Better.

The Chef Demonstration will be August 11 from 6:15 p.m. to 7p.m. at Lee’s Summit’s Westside Farmers Market.

The market is open every Thursday in August and September from 4 p.m.-8 p.m. and easily located in the open area behind the CVS in the New Longview Commercial District (3rd & Longview Blvd.)

In addition to a great range of fresh produce and goods, Westside Farmers Market will host the Celebrity Chef Grillin’ and Groovin’ Series.

Expect to have fun and to enjoy samples!

If you have a great food find in KC you think I am missing email me.