The Next Iron Chef Watch Party at JULIAN 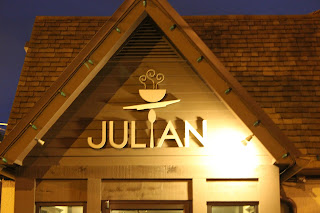 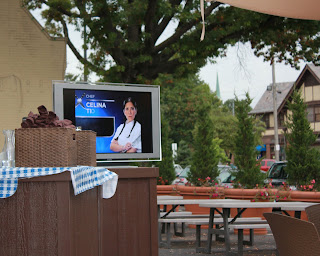 If you are a Kansas City foodie you are probably aware that Chef Celina Tio, owner of JULIAN is currently on season three of the Food Network show, The Next Iron Chef.

While the show is airing, Chef Tio is hosting watch parties on Sunday nights and will feature the dishes she made for that episode.

Last Sunday’s episode Secret Ingredient Challenge had the chefs create two innovative dishes using a duo of American breakfast favorite’s coffee and doughnuts. In the Chairman’s Challenge, the chefs had one grueling hour to innovate classic diner fare like meatloaf and corned beef hash to Iron Chef-quality cuisine. For Chef Tio’s classic, she had to make an innovative dish using the diner classic baked fish with rice pilaf.

We had some friends in town over the weekend and I made reservations for us to go to JULIAN for the Sunday night watch party.

For the coffee and donuts challenge, Chef Tio made an eggs Benedict type dish using an old fashioned doughnut, Canadian bacon, egg and red eye gravy. The second dish was a play on chicken and waffles with a buttermilk-fried doughnut as the base with fried chicken livers on top and a maple coffee glaze. Celina admits that chicken livers are not normal but it is an innovative approach.

To innovate baked fish and rice pilaf, Chef Tio slow baked Salmon and with a porcini and risotto cake topped with a lemon vinaigrette.

There was not a dessert featured in that episode but Chef Tio stuck with the theme and made a doughnut bread pudding with a wonderful vanilla bean sauce.

Whenever I watch Iron Chef or The Next Iron Chef I am always thinking, “I would love to be a judge so I could get to taste all those dishes.” It was such a fun evening getting to taste what was featured on the show. I loved watching the episode and seeing the reaction of others trying the dishes.

We had a wonderful time and the dishes were innovative and delicious. The Judges agreed and Chef Tio is still in the running to be The Next Iron Chef. You can also vote for her to win fan favorite online at www.foodnetwork.com

Thank you Chef Tio for being so creative and offering an experience like this!

If you are interested in attending a watch party reservations can be made by calling JULIAN at 816-214-8454. Cost is $35.00. Some dates are already sold out but a waiting list is available so call today!

Some other secret ingredients for upcoming episodes include fair food, potatoes, and chocolate. The Next Iron Chef airs on Sunday evenings at 8:00 p.m. on the Food Network.